It may seem like science fiction, but your next home may contain materials created on a 3D printer.

Major shifts in residential construction due to 3-D printing—also known as additive manufacturing—may not be visible today, but many agree they’re coming. “It’s a little bit down the road in terms of the mainstream, but it’s going to make for a big shift in the construction industry,” says Geoffrey Kasselman, SIOR, executive managing director at commercial real estate services firm Newmark Grubb Knight Frank’s Chicago office. “It will be very disruptive because it will cost a lot less and use a lot less manual labor.”

Behrokh Khoshnevis, an engineering professor and director of the University of Southern California’s Center for Rapid Automated Fabrication Technologies, has a prototype machine/printer that employs a robotic arm controlled via computer-assisted design that applies layers of quick-drying concrete in a pattern that resembles corrugated cardboard. Khoshnevis says the printer saves resources by using just enough material to create the building and no more, and that it can build the frame for a 2,500-square-foot building in about 20 hours.

The machine leaves spaces in the walls for electric, plumbing, and ductwork. Though his printer constructs only the building’s shell, Khoshnevis says even the finishing touches will eventually be automated. “Cars are all built automatically, and they are much more complex,” he says. “There’s no reason we can’t do that with a house.”

Khoshnevi, is working on a plan to “print” shelters for homeless populations and those devastated by natural disaster in the U.S. and abroad. He says, “Construction is really the last frontier for automation.”

While the prospect of house after house coming down a Ford-style assembly line seems a monotonous prospect, Khoshnevis predicts additive manufacturing will lead to greater creativity and customization. He notes that designers would simply have to change the command being sent to the printer; the raw material remains the same regardless of its final shape or complexity. “If you have software that allows you to design any type of shape, you can print any type of shape,” he says. In a new-home development today, buyers might be limited to the modifications offered in model homes on display. But the on-demand nature of 3-D printing could allow home builders to provide many more layout options at little cost to their bottom line.

Additive manufacturing might not only increase demand for high-tech space, but also change the locations where demand is highest. The major U.S. hub for 3-D printing is currently in northwest Ohio, due to interest from nearby universities and research institutions, but other academic centers such as Palo Alto, Calif., and Austin, Texas, could challenge that dominance. People also predict that demand in international port cities such as Long Beach, Calif., and Panama City may fall because, as more products are printed locally, fewer will be shipped globally.

Whatever the future of 3D printing in construction, it is bound to change the way we think about real estate. 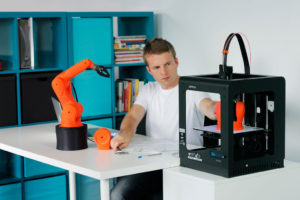